Lego's first foreign partner was Svein Stromberg in Oslo, Norway. Svein Stromberg & Co. A/S was a manufacturer of plastic houshold goods.
Because of import restrictions after the war, it was not possible to import finished plastic toys into Norway so Godtfred licensed the Lego toy molds and
sold their technical expertise to Stromberg. In exchange Stromberg promised to set up a separate sales division for the Lego toys, under the name Norske Lego
A/S. (however I have seen a number of these toys on auction sites labeled Norske LEGIO). Godtfred licensed a number of his molds, including the Ferguson
Tractor and the Lego Mursten.

Norske Lego, however, did not just manufacture and sell Lego toys, but, again because of import restrictions, toys from a number of different manufactures,
including the Copenhagen-based Tekno die-cast vehicles, which were sold under the name Mecline.

Sales apparently went rather well and Lego made a profit from the royalties on molds, etc.

Sometime later, as import restrictions were lifted, the manufacturing reverted back to Billund. However it appears that sales were still handled by Stromberg
via Norske Lego until Lego set up their own sales company, also called Norske Lego AS, in 1962. The newsales company was in Sandvika, Norway 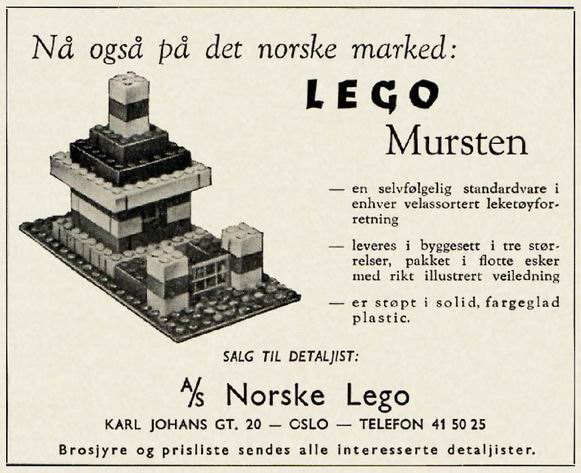